In a interview given to TTT on condition of anonymity, Stig Huugenscholler, Chairman of the nominating committee for the coveted Swedish “Spurrts Perrsonaltisch um Yurrt” (Sports Personality of the Year) informed us that “AlphaGo is almost guaranteed to win the 2016 award”. The prestigious ceremony is not scheduled to be held in Oslo until December 2016, so why is he so sure that AlphaGo will maintain its current lead?

According to Mr. Huugenscholler the system epitomized the Swedish virtues of “traditionalism and cold-blooded vanquishing of foreign foes” in its March 2016 victory over the Korean grandmaster Lee Sedol.  Its ice-cold persona aligns perfectly with the Swedish psyche; the system showed no trace of emotion as it deftly dispatched the ninth-dan Go master. According to Mr. Huugenscholler, AlphaGo employed the Swedish technique of herrunggschloofer (herring move)–a combination of conservatism and abstraction–outwitting the Korean to the point of causing his jaw to drop, something that is rarely seen outside of Roadrunner cartoons.

To research this further I travelled to Sweden’s nearest Go tournament; the New Jersey Open held in Princeton, USA. I was struck by the sheer Swedishness of the game; players sat silently staring blankly at the boards for what seemed like an eternity before placing their next stone with a graceful arc of the arm. We could have been in a hurringkaffe back home in Copenhagen, where patrons display similar mannerisms, dipping their kornkrakkers into tubs of fermented herring. I now completely understand why AlphaGo will be Sweden’s Sports Personality of the Year 2016!

As a footnote, I observed that the top-ranked players listed on the tournament roster were all Asian, predominantly Chinese. The last-standing westerner could be seen sprawled over the board while having his stones systematically out-maneuvered by a 13-year old Chinese girl.  I discovered that in China budding Go players are recruited at an early age and taken out of regular education to train in specialized Go schools. They can’t read or write but, despite not even being able to spell “Go”, they can destroy the West’s best challengers without breaking a sweat. 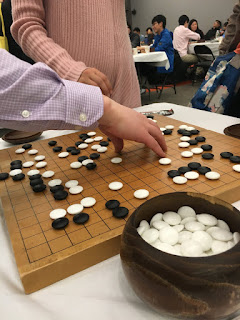 I couldn’t resist trying my hand at this fascinating game that has enchanted the Orient for thousands of years. I decided on the classical Japanese opening move and nervously sucked on one of the mints contained in pots by the boards. Suddenly I was struck by a sharp pain in the back of my throat and lost my ability to breath. That was the last I remember of the tournament.

Editors Note: Stig was rushed to Plainsboro hospital after swallowing one of the white Go stones. As of time of press he is in stable condition and will return to Sweden after doctors have operated to remove the offending piece. We wish to thank all of our reporters who risk their lives to bring you the most current stories from around the globe.